Can You Make the Money Last?
The Road to Sustainable Wealth

Maintaining family wealth over generations can be challenging. Now is the time to create and share a wealth plan designed to benefit your children and their children. 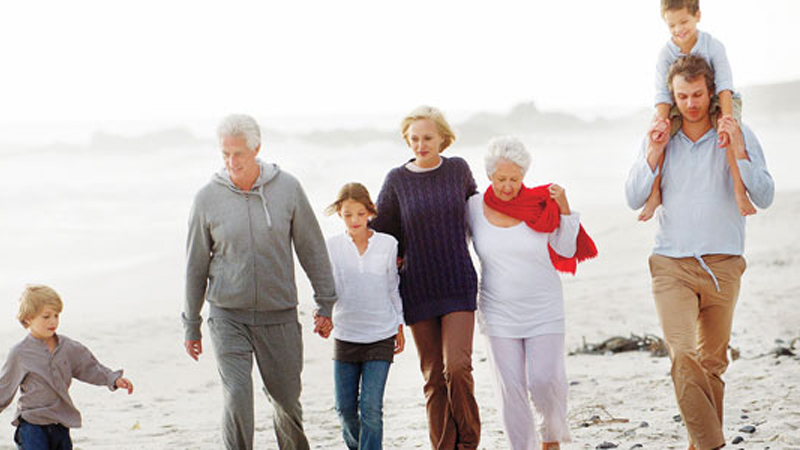 Most wealthy individuals want to make their money last not just for their own lives, but for generations to come. Yet amid other financial concerns, such as day-to-day business needs or focusing on investment strategies or portfolio returns, they often put off discussing and preparing to meet this vital goal. When is the right time to start thinking about sustaining wealth? And what are the essential questions you need to ask to help you make your money last? To start answering these questions and more, a survey of 171 high-net-worth individuals was conducted on our behalf. The results reveal a wide range of opinions on how to turn the desire of sustainable wealth into a reality. Here are some key ideas from the findings: 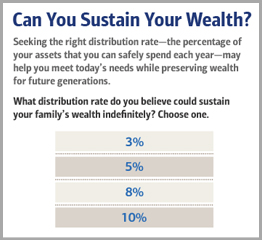 Defining sustainability, and figuring out how to get there. Many survey respondents were uneasy about their ability to sustain wealth, and that is a well-founded concern — sustaining wealth is not a goal with a finite end. One issue is defining "sustainability" and then dealing with expectations for budgeting. For example, 20% of respondents did not know what rate of wealth distribution (that is, the percentage of overall wealth spent over time) could help them to sustain wealth indefinitely. And nearly a quarter of respondents thought an annual distribution rate of 10% or higher might allow them to stay on track, which is incorrect. (For a primer on how high a distribution rate is reasonable, check out the Can You Sustain Your Wealth? infographic on the left.)

Opening the lines of communication. Survey respondents tended to overestimate the importance of factors that are out of their control, such as market performance and government actions, as threats to sustaining wealth. Also, they tended to underestimate the importance of factors within their control, such as communication. Communicating openly with family members on the sometimes-difficult subject of wealth can be a challenge, but starting the discussion is essential to educating the next generation and making sure they are ready for the responsibilities of wealth. Although about two out of five respondents think it's never too early to discuss financial wealth with heirs, most end up delaying the conversation until heirs are 18 or older.

Putting the right process in place. Successfully sustaining wealth requires a combination of realistic strategies and comprehensive conversations between generations about priorities for spending, saving and giving. And, while it also may require changes to lifestyle for a family, working with heirs to determine and agree on family goals — whether education costs, health care standard, or philanthropic assistance — will help define and establish a process for meeting those goals. In addition to conversations within the family, the research indicates that advisors, when helping to facilitate or plan these strategies, can play a critical role in discussions and can boost confidence.

Sustaining wealth requires the alignment of goals with actions — discussions and distributions need to be tracked toward your personal goals, both in life and for your wealth. To help start this discussion about sustaining wealth and to exhibit more research from our survey, we have included an infographic designed to help highlight acceptable distribution rates, a research summary for a quick overview of the survey results, and a whitepaper titled Can You Make the Money Last? for a more extensive and comprehensive conversation.

About the Study: Merrill Lynch's The Meaning of Sustaining Wealth survey was conducted by Phoenix Marketing International, an independent market research firm in December 2013 on behalf of Merrill Lynch Private Banking and Investment Group. A total of 171 individuals participated in the survey; all were at least 21 years of age and possessed $5 million or more in investable assets. All data was tested for statistically significant differences by age and investable assets at the 95% confidence level.

This material does not take into account your particular investment objectives, financial situations or needs and is not intended as a recommendation, offer or solicitation for the purchase or sale of any security, financial instrument, or strategy. Before acting on any information in this material, you should consider whether it is suitable for your particular circumstances and, if necessary, seek professional advice. Any opinions expressed herein are given in good faith, are subject to change without notice, and are only correct as of the stated date of their issue.

Important notice: you are now leaving the Private Banking and Investment Group website.

Clicking CONTINUE will take you to a website that PBIG is not affiliated with and may offer a different privacy policy and level of security. We are not responsible for and do not endorse, guarantee or monitor content, availability, viewpoints, products or services that are offered on other websites. Clicking RETURN TO PBIG will take you back to the previous page.